This article was published by Fast Company.

More than 20% of nonprofit employees identify as LGBTQ. Perhaps that’s not surprising: Those who have traditionally been discriminated against or oppressed may have a strong impulse to ensure fair treatment and opportunities for others.

What is perhaps surprising (or, perhaps not) is that many LGBTQ workers within the nonprofit world are still reporting unfair treatment—this time by their own professional peers, according to a recent report from the Building Movement Project, a nonprofit research group.

The results are part of BMP’s ongoing studies in workplace diversity, which initially focused on the glaring gap in leadership opportunities for people of color. Despite being equally qualified and in fact more interested in promotion than white counterparts, many job candidates of color are consistently overlooked for advancement. The initial survey that led to those conclusions included 4,400 people throughout the industry. BMP has since used more answers to spot trends about sexuality, race, and career impact and reveal more obvious bias.

In general, roughly one-fifth of U.S. workers who are gay have encountered discrimination in their workplace, notes the report. Within the nonprofit world—a place ostensibly championing equal rights for all—that trend stays true. Most LGBTQ employees aren’t working at LGBTQ advocacy groups: BMP’s data shows they’re scattered fairly evenly throughout the industry to improve things like basic human services, education, and health and mental health access. That often means working in communities where there may be bigotry and within states without sexuality-based anti-discrimination laws. (For LGBTQ people of color, the challenge is twofold because there’s an additional burden of institutional racism to contend with.)

Here are 4 charts that BMP has developed to explain the problem: 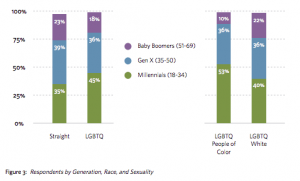 As you can see in the graph below, gay employees aren’t just a main part of nonprofit organizations, they’re the future: A proportionately higher number of millennials identify as LGBTQ compared to their straight counterparts. When separated by race, young LGBTQ people of color are even more strongly represented.

The report notes that while a PEW Research Center survey found that 21% of LGBTQ people feel they have been treated unfairly by their employer, things aren’t any better at nonprofits. About one-fifth of employees feel their sexuality has negatively impacted their career advancement, while straight employees don’t see similar problems. 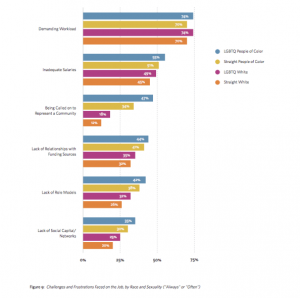 The next chart breaks out what challenges and frustrations that workers feel by both sexuality and race. Note the orange bar, which represents straight white people: It’s lower in nearly every category of oppression while, overall, LGBTQ people feel they face overly demanding workloads with inadequate compensation. Anecdotally, many of BMP’s respondents shared stories about not being promoted or forced out of similar jobs because of their sexuality. 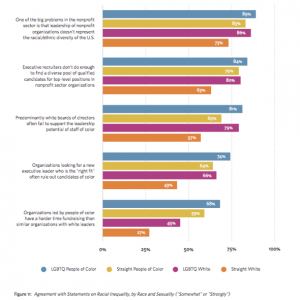 The People Who Experience Bias Understand How Pervasive It Is

The graph below shows the rate at which respondents strongly agree with statements like: “One of the big problems in the nonprofit sector is that leadership of nonprofit organizations doesn’t represent the racial/ethnic diversity of the U.S.” Or that predominantly white board members don’t support the “leadership potential” non-white staffers. In these and several more scenarios, LGBTQ employees admitted there was likely significant bias, perhaps because as a potential target for discrimination, they’re more sensitive to bias in many forms.

Per the BMP report, major LGBTQ organization funders like the Arcus Foundation are trying an intersectional approach to tackling this problem, by ensuring that whatever labor and immigration cause work they back is designed to be intentionally inclusive to LGBTQ needs and open to LGBTQ leaders.

There’s obviously more work to be done. View the full report and other suggestions for how to solve things here.