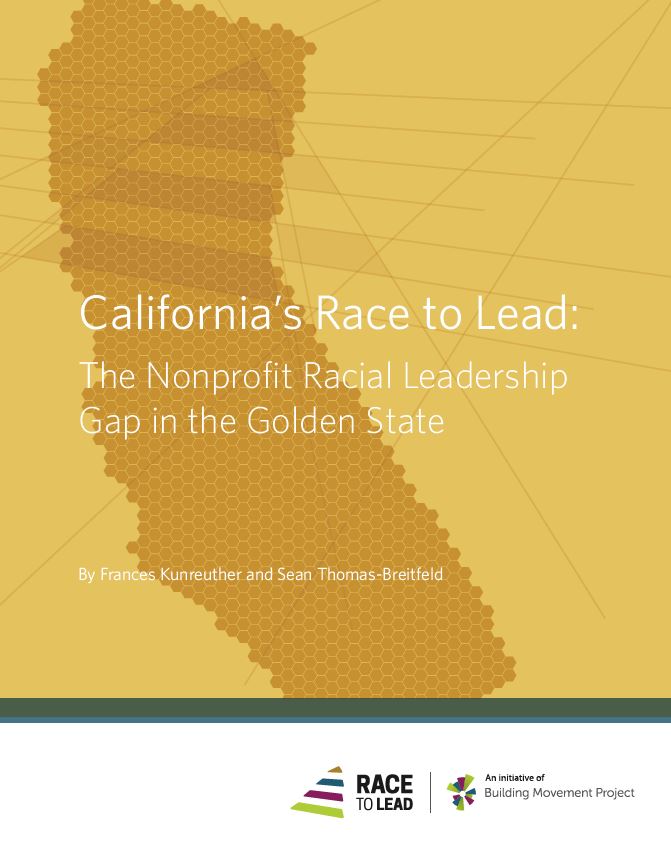 This Q+A was originally published by Upswell, powered by Independent Sector. To view the full article, please click the link below.

We recently caught up with Building Movement Project’s Co-Director Frances Kunreuther to talk about their latest report, California’s Race to Lead: The Nonprofit Racial Leadership Gap in the Golden State. Their first Race to Lead report, which looked at the sector’s nationwide data on the leadership gap based on race, made waves in the sector and led many organizations to take a hard look at their internal practices and question the systematic ways we reinforce the gap. Understanding this topic and other ways that racial equity should be a priority for all changemakers will be among many issues discussed at Upswell, November 14-16 in Los Angeles.

KGC: The last time we caught up with Building Movement Project, it was right after the first Race to Lead report came out. How has the sector reacted to that report? Do you think it’s helping to make any progress in the sector around the racial equity leadership gap?

FK: It’s been great to see the interest in the Race to Lead reports. Sean Thomas-Breitfeld, co-director at Building Movement Project, and I have had opportunities to present the findings around the country, and the conversations it generates make us feel hopeful that change is possible. We are also keenly aware that data and talking about the “problem” is not the end goal. The real test is that groups do something different – that more people of color are hired into top leadership positions, that funders invest significantly more than they do now in people of color-led organizations, that boards support people of color leadership to succeed, and that boards become more diverse.

KGC: Tell us why Building Movement Project decided to focus on California for its first state-focused report.

FK: California’s Race to Lead is a forward-looking report. As so many people have pointed out, California is the bellwether state: it is majority people of color, it has pioneered employment moving from manufacturing to technology, and it has a large nonprofit sector. Plus, Sean held several focus groups in California, which helped us to have a more nuanced understanding of our findings.

KGC: It’s true that people do see California as a “bellwether state” but this report shows that while California has made progress, the gap isn’t completely closed. What challenges do leaders of color in California still face?

FK: Good question! It’s hard to know. We note that it takes both “a push and a pathway.” Almost a decade ago, a report was released in California that showed how little philanthropic investment went to people of color-led groups and to communities of color. To make a long story short, philanthropy made a 10-year investment of $38 million to address this problem. That was the push. The pathway has been finding practical and effective ways of supporting – and investing in – existing and emerging leaders of color and their organizations.

KGC: For changemakers in California and beyond, can you highlight just one of the major recommendations this report makes?

FK: One simple recommendation: invest in people of color-led organizations. Capacity building, leadership development, and technical assistance are all important supports to nonprofit leaders, including leaders of color. However, direct financial investment in the organization, whether it is program or general operating funds, provides even greater security, stability, and possibility. We found that organizations headed by people of color had smaller budgets than those led by white leaders, leaving POC-headed groups more vulnerable. Financial support to organizations led by people of color helps existing and new leaders. Plus, it’s easy to measure!

FK: Though there is still much work to be done, we were excited that California can help lead the nonprofit sector in promoting and supporting leadership of color. We hope to see even more progress when we do another survey in 2019!