Few people of color lead nonprofits, and bias is to blame, says report 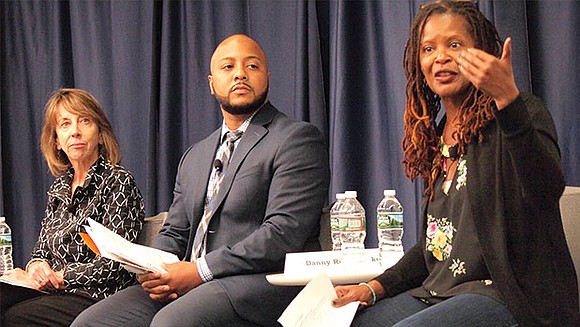 This article was originally posted by The Bay State Banner. Click the link below to view the original article.

During a discussion at The Boston Foundation last week, report co-author Sean Thomas-Breitfeld said that while there are numerous people of color in senior management second-tier leadership positions, there appears to be a barrier to top-level roles such as executive director or board chair. Beyond moral reasons, taking steps to advance diversity, equity and inclusion are critical to effective work, said various speakers at the event.

“It is not a ‘nice to do,’ it is a ‘must do,’” said Orlando Watkins, The Boston Foundation’s vice president for programs.

There is a prevailing myth that the absence of people of color among leadership roles was due to a weaker interest in leading, a need for skills training and a tendency for qualified leaders of color to leave the sector, stated Thomas-Breitfeld and Francis Kunreuther, Building Movement Project co-directors and co-authors of the report.

However, when they surveyed thousands of people from the nonprofit sector, the researchers found that respondents of color were more likely than white respondents to aspire to leadership. People of color and whites reported similar experience, skills and educational backgrounds, although some people of color said they felt that official documentation of their skills, such as certificates, was more important for them as their qualifications would be scrutinized more harshly than those of similarly-skilled white candidates.

Obstacles stemmed from biased systems, with many minorities passed over in hiring due to assessments that they were not a good “culture fit” — essentially being filtered out due to unconscious bias. Many reported that recruiters for top-level nonprofit positions did a poor job of finding and presenting numerous candidates of color. Respondents of colors also reported a lack of mentors, a perceived lack of human resources support and stress from being asked to represent their entire race to white colleagues. In a write-in response, one person said their organization seemed to value only their racial identity, and to overlook their other abilities.

Even when people of color lead nonprofits, many perceive less access to funding sources, with some saying that connecting with traditional funders depends largely on access to funders’ social circles or similar enough backgrounds to make personal connections.

“So much about fundraising is about personal connections and moving in particular circles and engaging with people in a particular way,” said panelist Trina Jackson, inclusion initiative program coordinator for TSNE MissionWorks (formerly Third Sector New England). “You’re talking to people, networking and interacting — having a conversation on where you went to school, where you go on vacation, what kind of food you eat. We know there is racial segregation across all of those areas. If that’s the main way we do fundraising, then people of color are absolutely facing a barrier.”