How Your Nonprofit Can Join the Race to Lead

This blog post was originally published by the National Council of Nonprofits.

When the Building Movement Project (BMP) launched our survey on nonprofits, race, and leadership in the spring of 2016, many nonprofit leaders were still learning what the letters D, E, and I stood for. But today, the acronym for Diversity, Equity, and Inclusion is ubiquitous, and countless workshops at nonprofit conferences have explored what organizations can and should be doing to live up to their values.

Given how much has changed over the past three years in the sector – and the country – we have launched an updated survey at bit.ly/RacetoLeadSurvey. More than 4,000 nonprofit staff took a half-hour out of their day to complete the survey back in 2016.  So many people and organizations were helpful in getting word about the survey opportunity out to their colleagues – and we hope you will show the same enthusiasm using the tools at bit.ly/RacetoLeadSurveyInfo to spread the word about this year’s survey.

One of the striking findings from the 2016 survey was that 80 percent of respondents – across races – agreed with a statement asserting that one of the sector’s “big problems” is that the leadership of nonprofit organizations doesn’t reflect the nation’s diversity. Despite the widespread agreement, there were contrasting views about the roots of the problem and what to do about it. 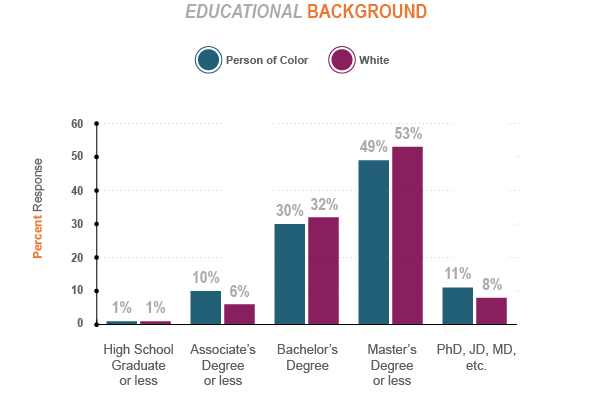 For years, the dominant narrative about how to diversify nonprofit leadership was to give people of color more training and support so that they would become “ready” to lead. But when analyzing our survey data, we found that respondents of color were no less ready than white respondents. We did not find large racial gaps in traditional measures of readiness, like educational attainment, number of years in the sector, or the kinds of training that people reported receiving. Instead, people of color reported that they had to prove their qualifications and readiness more than their white peers. So, for many aspiring leaders of color participating in training programs was a very tactical decision that was more about getting a stamp of approval that would open doors that were otherwise closed due to racial bias – whether implicit or overt.

Over the past two years, we have released half a dozen reports using the data we collected in 2016. We showed how nonprofit staff of color experienced racial bias and intersecting oppressions based on gender and sexuality. We examined how the local context can expand or limit opportunity for people of color to lead nonprofit organizations in particular states. We unpacked the nuanced experiences of people of color who ascend to the top of nonprofit organizations, but still experience racial barriers that both take a personal toll on themselves and impact their organizations.

But the survey isn’t just about exposing the problems of racial inequity in the nonprofit workforce. Thanks to the many presentations and workshops at nonprofit state association meetings and conferences across the country, we met nonprofit leaders and capacity builders who are working to make organizations more equitable places to work. We’ve incorporated many examples of DEI interventions into this updated survey to begin tracking what organizations are doing to address these long-standing issues. This fall and winter, we will be pilot testing similar questions as part of a free organizational tool that aggregates the feedback of nonprofit staff so that organizations can better assess where they are on their equity journey and whether nonprofit staff think those efforts are actually working. We know that inventories of staff diversity and HR policies are useful, but to understand how people are experiencing their nonprofit workplaces, we have to ask them.

That is why we are so grateful for the continued support and partnership of the National Council of Nonprofits. Please help spread the word about the 2019 Race to Lead survey throughout the month of August. Everyone working for a nonprofit organization in the United States, and U.S. territories can complete the survey, so share the survey link – bit.ly/RacetoLeadSurvey – wide and far!