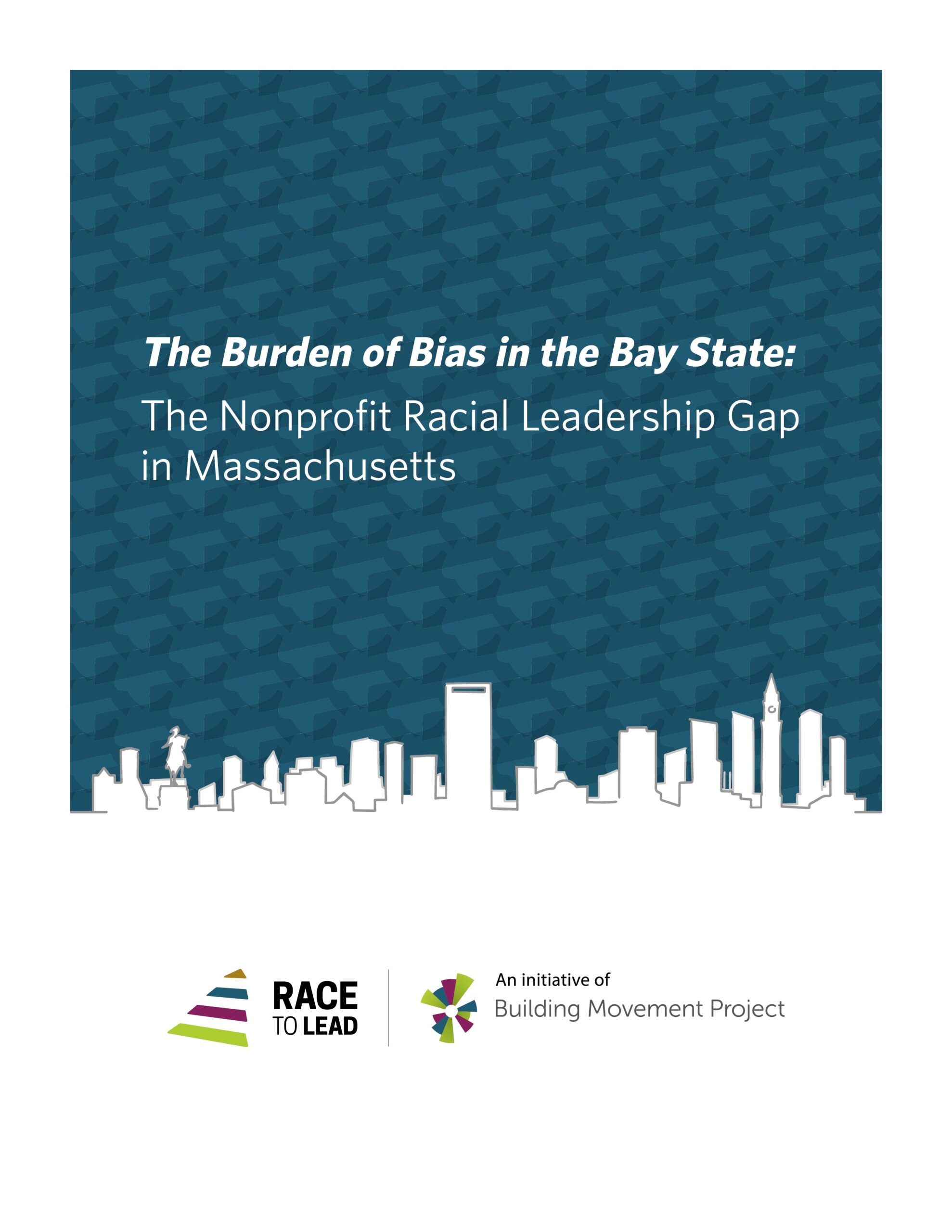 This press release was released by The Boston Foundation on October 28, 2020. To view the original version and accompanying data figures, please click the link below.

Boston – New research from the Building Movement Project for the Boston Foundation and the Barr Foundation finds that Massachusetts continues to follow national trends in its failure to promote, retain and support nonprofit leaders of color. The report, The Burden of Bias in the Bay State: The Nonprofit Racial Leadership Gap in Massachusetts, used a survey of more than 400 nonprofit leaders and employees and a series of focus groups conducted shortly before the COVID-19 pandemic to get perceptions and data on diversity, equity and inclusion efforts in the Massachusetts nonprofit sector.

“The COVID-19 pandemic and the rightful protests over the brutal murders of Black and Brown men and women have demonstrated the consequences of structural racism,” said Jennifer Aronson, Associate Vice President for Programs at the Boston Foundation. “But they have also helped illustrate the power and importance of BIPOC nonprofit leaders who are authentically connected and rooted in the communities they serve. We hope this report inspires us as a sector to redouble our efforts to tear down the biases, practices and policies that are holding back too many of our communities’ most valuable leaders.”

“While Massachusetts and Greater Boston are rapidly becoming more diverse, this report illustrates just how slow and challenging it continues to be for people of color in the nonprofit sector,” said Kimberly Haskins, Senior Program Officer, Sector Effectiveness, at the Barr Foundation. “This research shows that qualified, experienced, inspired people of color are simply not getting the opportunities of their white counterparts – and that must change.”

As in the 2018 Race to Lead Massachusetts report, the data show that people of color are more interested than their white peers in assuming leadership roles within the field – 51% of people of color in the survey expressed leadership aspirations, versus just 38% of white respondents.

However, nonprofit staff of color were more likely to express frustration with their limited opportunities for advancement, and fully half of staff of color in Massachusetts said they felt their race had a negative impact on their career advancement, versus just four percent of white staff.

In most cases, the Massachusetts findings closely followed national trends – however, white respondents in Massachusetts were more likely to call out the structural racism in promotions and executive hiring than peers nationally.

Disparities in compensation and a lack of networks

Respondents of color in Massachusetts and nationally were more likely than white respondents to say their salaries were inadequate (42% to 33%). They were also nearly twice as likely to call out their salary as inequitable, relative to colleagues doing similar work (31% to 17%).

And in a troubling trend echoed nationally, respondents of color were less likely than white respondents to say they had received a cost-of-living raise or a performance-based raise during the previous year.

And finding role models and mentors, while difficult nationally, seems to be even more challenging in Massachusetts. Respondents of color more often said that they needed to go outside their organizations to find mentors for advice and support. In addition, respondents of color in Massachusetts were more than twice as likely as white respondents to say they often or always experienced a lack of role models than white respondents, and more than twice as likely to highlight a lack of social capital and networks that can be key to advancement.

Awareness and engagement in DEI has grown – but problems loom

One place where Massachusetts nonprofits seem to lead their peers across the country is in embracing the importance of diversity, equity and inclusion – DEI for short. Eighty-two percent of Massachusetts respondents indicated that their organization was engaged in DEI efforts, compared to 74 percent nationally – and this data was gathered before the current pandemic and social justice crisis that has put DEI issues even more front and center. Much of that work is focused inward: the top three initiatives in place included training for staff, leadership, or board; addressing ways that race inequity/bias impact the issues on which the organization works; and clarifying that DEI is central to the organization’s purpose and reflected in its mission.

While awareness of DEI's importance has risen – more than 9 in 10 white and POC respondents to the survey said a lack of diverse leadership is a “big problem” in the nonprofit sector – respondents see the path forward as problematic. Seventy-seven percent of POC respondents, and 62 percent of white respondents, said nonprofit leaders lack the will to make needed changes, while three-in-five respondents overall said trying to address race and race equity can create issues that nonprofits are not equipped to resolve. This leads to a level of skepticism about the potential of success expressed to researchers in the Massachusetts focus groups.

One way for nonprofits to overcome the challenges of the difficult work of DEI, the authors note, is to connect with peer organizations that share similar goals. The Building Movement Project also highlighted five key opportunities for those networks:

The Building Movement Project offers more in-depth descriptions of the change efforts above in the national version of this report, Race to Lead Revisited: Obstacles and Opportunities in Addressing the Nonprofit Racial Leadership Gap.