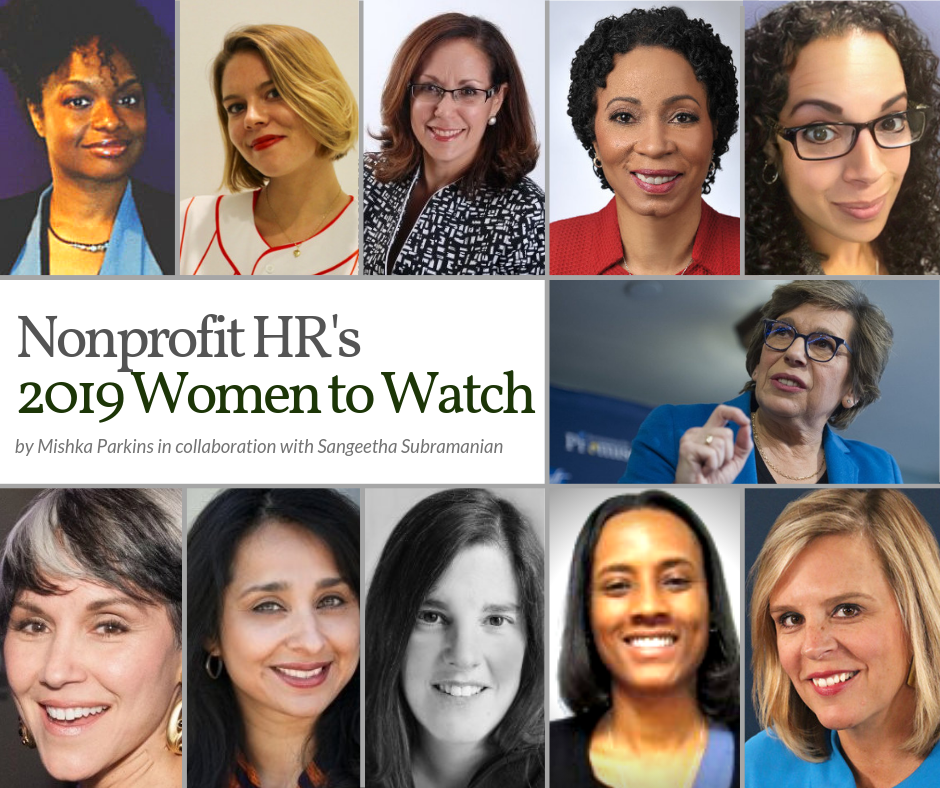 By Mishka Parkins in collaboration with Sangeetha Subramanian

This article was originally published by Nonprofit HR. To read the full article, please click the link below.

To say now is an interesting time for women would be an understatement. The events and movements of the past few years have sparked joy and pride just as much as they have sparked anger and disappointment. Just think of the #MeToo movement, or the exponential increase in entrepreneurship among black women, or the record number of women elected to the U.S. House of Representatives. Women have much to celebrate yet in many respects, we have a way to go.

In recognition of Women’s History Month, Nonprofit HR honors eleven women ushering us into a brighter future! In their own unique ways, they are making their corners of the world a bit brighter.

The list is as diverse as the women and the lives they have lived—there are women at different career stages, with varied backgrounds upholding wide-ranging causes. What is common however, is their commitment to boldly evoke change in their own way. See our list of women that are making an impact on not just the nonprofit sector but humanity as a whole. Ofronama Biu, author of the recently published Race to Lead: Women Of Color In The Nonprofit Sector, is shedding light on gender inequities like we haven’t seen before. Her report brings a new and nuanced analysis to Race to Lead’s 2016 data by examining the complexity of the intersection of race and gender of career outcomes for women of color. Confirming biases that we have long suspected but had yet to confirm, the report adds to the growing call for a more systematic approach to removing race- and gender-based barriers in the workforce. There is still much to learn about the nonprofit workforce but we acknowledge this PhD candidate’s contribution to illuminating the path toward creating workspaces that are inclusive for all.

Impact: Ofronama’s work adds depth to our current understanding of the nonprofit sector and some of the challenges that lie within it. Her work fills the research gaps that have for too long lead to partly and poorly-informed decision making. We look forward to watching her future contributions to the Building Movement Projects’ work in the sector. Focus, relevance, and impact… those are three words that keep Kimberly Churches grounded in work that brings results. As the head of the American Association of University Women (AAUW), Churches is in service of an urgent mission that requires laser-focus. Since 1881, the AAUW has promoted equity for women and girls. Such a mission requires breaking systemic barriers and Churches named her focus. With Churches’ guidance, the AAUW is addressing gender inequity by tackling three core areas: education and training, economic security, and leadership.

Impact: Kimberly(@ChurchesK) is focused on getting her organization and the women and girls it serves quantitative and qualitative results. We’re fans because Kimberly doesn’t just break personal barriers in traditional male run spaces, but rather, she paves the way for women and girls to do the same. There’s a tab on Claire Coder’s website that announces, “I’m legit” and it’s easy to agree! The founder of the social enterprise, Aunt Flow, first ventured into entrepreneurship at 16 and has since amassed many accolades. Just to name a few, she was the youngest 40 under 40 recipient, Columbus 2017; ranked on the Top 100 Young Entrepreneurs with the National Federation of Independent Businesses, 2015; and placed as a finalist in the 2017 Aspire Awards. Claire’s current passion project is driven by a deep desire to change the entire menstrual products industry by increasing access to free tampons and sanitary napkins. Aunt Flow stocks free menstrual products in businesses and schools and has donated over 350,000 menstrual products to organizations across the U.S. Aunt Flow also adds to the larger conversation and menstrual movement to end period poverty and stigma. Take, for example, the documentary Period; End of Sentence that won an Academy Award and Oscar, and the Pad Project.

Impact: @ClaireCoder sparks dialogue and uses humor to weaken the menstruation stigma and her entrepreneurial venture creates a solution to a problem impacting billions of women across the globe. Life-Long Learner, Glass-Half-Full Thinker, Justice Seeker, Purposefully Tenacious, Tirelessly Happy & Love Loverthat is how @VanessaVcrosado describes herself on her twitter profile. All are fitting descriptions, as Vanessa has long fought against the displacement of low-income residents in Boston by using strategy, compassion, positivity and grit to get results. For more than a decade she has lead the Inquilinos Boricuas en Acción (IBA)—a nonprofit that was created in 1968 to end the displacement of Puerto Ricans of Parcel 19 in South End Boston. Under her tenacious leadership, IBA has grown to be the largest Latino-led nonprofit in the Greater Boston area. She was also instrumental in creating Massachusetts’ first dual-language innovation high school, the Margarita Muñiz Academy. In addition to a long list of accomplishments, Vanessa made history by becoming the first Latina appointed to the Massachusetts State Board of Elementary and Secondary Education in 2010.

Impact: @VanessaVcrosado epitomizes the idea of being the change by purposefully committing herself to ending displacement and improving people’s lives. Dr. Helene D. Gayle, President and CEO at The Chicago Community Trust, attributes Chicago’s biggest challenges to the racial wealth gap. The economic inequality, roughly a ten-fold wealth gap between White and Black Chicagoans, is expected to increase without interruption to the trajectory. At the end of 2018, Dr. Gayle announced the Trust’s new vision to close the gap through strategic interventions. Her long history of marshalling resources to improve lives around the globe prepares her for the feat. Dr. Gayle’s efforts have also been recognized in several areas: the 100 Most Powerful Women (Forbes), Top 100 Global Thinkers (Foreign Policy Magazine), Top 10 Women in Leadership (Newsweek), and Power and Influence Top 50 (The Nonprofit Times).

Impact:Dr. Gayle and the Trust are working to eradicate the wealth disparities that have slowed the city’s growth for some time. In the coming months, we look forward to seeing the Trust’s strategic actions solidify and spark more change. Lisette Martinez is boldly leading efforts to advance diversity and inclusion throughout a mega healthcare system. As Yale New Haven Health System’s (NHHS) Chief Diversity and Inclusion Office, Lisette spearheads strategic efforts to correct the systems that perpetuate a lack of diversity in the healthcare workforce. She has long been focused on changing the face of healthcare to be more reflective of the population and she has awards to show for it. Lisette (@Lisette1908) ranked on the 2016 Top 100 Under 50 Executive Leaders list by Diversity MBA magazine, received a Forty Under 40 award in 2012; and was one of the first women in Cincinnati to receive the Women of Influence Award by Lead Magazine in 2013.

Impact: Lisette has proven herself a force to be reckoned with by advancing diversity throughout NHHS and more broadly within the healthcare market. From attracting diverse staff, to increasing employee cultural competence, and advocating the use of minority suppliers, Lisette’s comprehensive approach to advancing diversity is refreshing. Doniece Sandoval is a former Marketing Executive turned entrepreneur and social activist. Sandoval’s brainchild, Lava Mae, was birthed by her desire to reunite San Francisco’s houseless community with their dignity. Doneice says it best, “With hygiene comes dignity, and dignity unlocks opportunity. Everyone has a right to be clean. People struggling with homelessness need this the most.” In the five years since its inception, LavaMae has provided an innovative and powerful solution. Lava Mae’s mobile hygiene model provides replicable solutions that have delivered more than 60,000 showers to over 16,000 houseless people. Lava Mae recently ramped up capacity, expanding to Los Angeles, which declared a state of emergency due to homelessness, and the Venice area with two mobile hygiene units.

Impact:We were honored to feature Doniece as a keynote speaker at the 2018 Nonprofit Talent & Culture Summit! At the end of her presentation, there was not a dry eye in the room. Doneice and @LavaMae have ignited a Radical Hospitality revolution and we are forever fans of hers for her ingenuity in leading the charge to restore the dignity of our houseless neighbors. Increasing attacks on houses of worship has become our reality. Suhag Shukla is changing this climbing trend by shedding light on Hindu-phobia and reinforcing the everyone’s right to religious freedom. At the helm of the Hindu American Foundation (HAF), Suhag lends a strong voice in support of the separation of church and state. Her work includes heading up the Bhutanese American Project, which was developed to support Bhutanese Hindus that are challenged to maintain their culture after migrating to America. @SuhagAShukla is just getting started. She was named one of twelve faith leaders to watch in 2017 by the Center for American Progress and serves on numerous religious advisory committees.

Impact: Shukla holds us accountable working to ensure that religious liberty is a reality and not simply rhetoric. Youth incarceration is costly. It leaves lasting impacts on post-incarceration quality of life and earning potential. Just imagine what that looks like for the 8,094 children incarcerated in the state of California. In addition to the impacts that cannot be quantified, the cost of youth incarceration is up to $246, 210 each year (the most expensive confinement option per child) in California. That is more than 26 times the cost of public school education in the State ($9,220). Liz Ryan has been tirelessly working to change these stats over the course of her career. She is currently the head of Youth First Initiative which just tackles youth incarceration and is positioning to eradicate it entirely by closing youth prisons.

Impact: Liz’s commitment to ending youth incarceration goes without question. Prior to Youth First, she founded the Campaign for Youth Justice which has helped to reduce the prosecution of youth in half the states in America. She’s also spearheaded the launch of Act 4 Juvenile Justice. With a 16+ year tenure in nonprofit management and leadership to back her up, Timeka Walker takes a no holds barred approach to eradicating human trafficking. Her motivation is understandable considering that an estimated 40.3 million are victims of human trafficking globally. As the head of United Against Human Trafficking(UAHF), Timeka and her team are using education and awareness to fight to cycle of exploitation that often happens right under our noses. Labor trafficking, for example, is more prevalent than sex trafficking and receives little to no media attention. It also happens right in front of us as many that are essentially modern-day slaves work in neighborhood homes, restaurants, and hotels. We have Timeka to thank for taking a front-and-center role in this fight!

Impact: Timeka has lead programs and operations for missions committed to defending human rights serving at-risk youth, HIV positive homeless men and women, and those suffering from mental illness. We are looking forward to seeing how she tackles the human trafficking crisis in the years to come. Confidence in the U.S. public system has been on the decline since the mid-70s despite much rhetoric around education reform. Luckily for us, Randi Weingarten is making change happen, and is not discouraged by the poor perception of our school systems. Weingarten advocates for a community- and educator-driven agenda to actualize education reform and has taken countless actions to improve struggling schools. She is currently the President of the American Federation of Teachers, which played a significant role in the creation of New York City’s Chancellor’s District.

Impact: Weingarten (@rweingarten) understands that school improvement doesn’t happen in silos, she has marshalled the power of governors, teachers and community leaders alike to get closer to education reform that benefits children.

As always, this is just the start of our conversation. We look forward to watching the continued impact of their work in the years to come.

For more information about how you can be involved in Nonprofit HR’s community, see our events page.