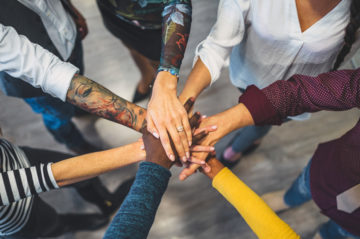 This article was originally published by Take the Lead. To read the full article, please click the link below.

Yet in 15 years, women of color have held the same percentage of leadership roles as directors and CEOs in more than 4,000 nonprofit staff members in this country, with few gains in representation.

In 15 years, women of color have held the same percentage of leadership roles as directors and CEOs in more than 4,000 nonprofits in this country, with few gains in representation.CLICK TO TWEET

A new study, Race to Lead: Women of Color in the Nonprofit Sector, from the Building Movement Project, found from surveys of more than 4,000 nonprofit staff across the country that the percentage of women of color who are in the “executive director/CEO role has remained under 20 percent for the past 15 years.”

The report “shows that people of color have similar qualifications as white respondents and are more likely to aspire to nonprofit leadership positions. The findings stood in contrast to the widespread assumptions that there are not enough people of color willing and able to lead.”

Yet, due to subtle and blatant bias, women of color report “being passed over for jobs or promotions in favor of white women, white men, and men of color with comparable or even inferior credentials. Having an advanced degree had no impact, and women of color with higher education were still more likely to be in support roles and to earn less than their white counterparts with less training and education,” the report shows.

Due to subtle and blatant bias, women of color report “being passed over for jobs or promotions in favor of white women, white men, and men of color with comparable or even inferior credentials,” a report from @BldingMovement shows.CLICK TO TWEET

“The data reveals what is really happening in the workplaces and the frustrations women of color are experiencing,” said Ofronama Biu, author of Race to Lead and senior research associate at Building Movement Project. “Women of color lack meaningful feedback at work and, on the other hand, often face excessive questioning about their decisions and actions.”

The Women in Nonprofit Leadership conference last week in Philadelphia with the mission to improve and enhance the roles of women in nonprofits. “As the landscape of nonprofit management continues to evolve, the need to implement efficient systems and adhere to strategic decision-making processes is more crucial than ever. This convening of women in leadership positions – and those who aspire to lead organizations – will set the table for constructive conversation and the effective creation of a network of resources, a marketplace of ideas, and exciting opportunities to connect and collaborate.”

Read more in Take The Lead on women in nonprofits

According to Fast Company, “The vast majority of nonprofit leaders are white men. Some simple math indicates then that women of color within the sector face twice the chance of being discriminated against, as racial and gender bias intersects. More than any other demographic, women of color report that they’ve been overlooked for advancement. Those with advanced degrees are more likely to hold lower level jobs, compared to everyone else in the workplace. Come review time, they’re also more often ignored or highly scrutinized in ways that appear directly related their minority status.”

The bias is reflected not just in advancement, but in salary. Fast Company reports, “Overall, 38 percent of white men with an advanced degree reported making over $100,000, while everyone else was a big step behind them. Women of color and white women both finished at the back of that pack. At the same time, 28 percent of highly educated women of color earned $50,000 or less.”

According to the report, “the data shows that nonprofit organizations need to dramatically change more than the words we use on our websites and in our grant reports. Real change means re-shaping the hierarchies and power structures in the nonprofit sector, the ways organizations behave, and how they treat their staff, particularly women of color.”

Read more in Take The Lead on women in nonprofits

There is some shifting in this sector.

According to Tessie Castillo writing in Filter, “Some organizations are beginning to recognize the value of bringing diverse backgrounds to leadership positions, and the likes of Planned Parenthood, the American Association of Retired Persons (AARP), the Drug Policy Alliance(DPA) and Harm Reduction Coalition (HRC) have recently passed the torch to women of color (Planned Parenthood for the second time).”

Castillo writes, “But even those who welcome the advancements of people of color are sometimes cautious. Racism is insidious in its camouflage. Merely having some women of color in leadership positions does not remove the structural barriers that many others still face in the workplace and elsewhere. Worse, it may sometimes serve to allow an organization the appearance of diversity while still maintaining the very obstacles that prevent the mass advancement of people of color.”

Additional research confirms women of color want to move up the ladder to nonprofit leadership.

In another 2018 study, research commissioned by The Chronicle of Philanthropy and New York University’s George H. Heyman Jr. Center for Philanthropy and Fundraising, “72 percent of women in nonprofits under age 35 and 64 percent of women ages 35–44 said they wanted to hold leadership positions,” according to Magdalena Nowicka Mook, Executive Director and CEO of ICF,  writing in  Forbes.

Mook writes, “Only 7 percent of women who didn’t aspire to be leaders said they believed themselves incapable of doing the job. Investing in women’s professional growth through third-party resources can help reduce this gender gap, add value to organizations and provide women with the tools to unlock their potential.”

“The Race to Lead findings validated dynamics I see in the nonprofit world,” says Sandra Gasca-Gonzalez, vice president at the Annie E. Casey Foundation’s Center for Systems Innovation, and a panelist for a Race to Lead webinar. “There’s a common assumption that people of color need more training in order to become nonprofit leaders. Organizations that turn away from a diverse workforce and diverse leaders will suffer in the future because they will be out of touch with the diverse cultures and races that make up our country and the people they are charged with serving.”

We want you to be a part of the Take The Lead community: Connect with us on Twitter @takeleadwomen. Find out more here on our 50 Women Can Change The World programs. Subscribe here to our Take The Lead weekly newsletter. Join us on LinkedIn.