Panelists, researchers discuss ways to break down 'the 'burden of bias' within Mass. nonprofits 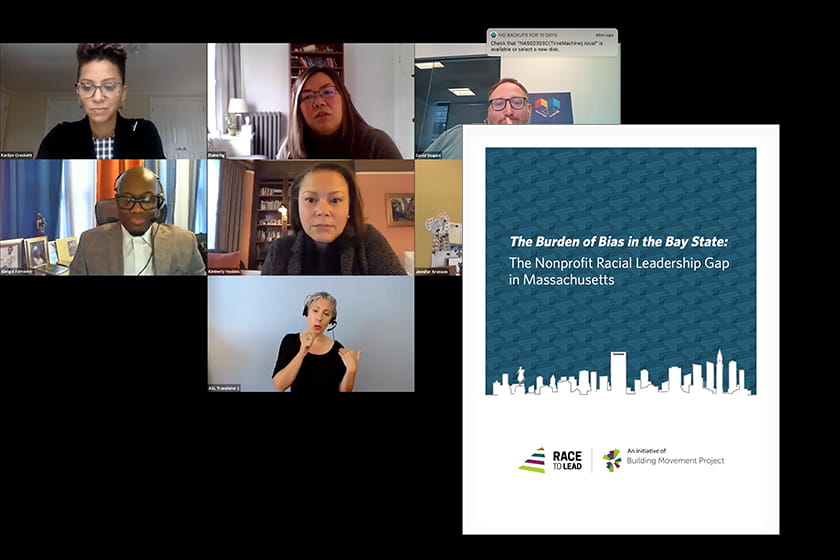 This recap was released by The Boston Foundation following their webinar on October 28, featuring the Building Movement Project Co-Directors. To view the original version and recording of the webinar, please click the link below.

Four hundred and fifty people tuned in for a forum hosted by the Boston Foundation on October 28 to hear an update to the Race to Lead study on racial equity in nonprofit leadership. They were not disappointed, as a compelling panel discussion followed a clear presentation of data collected across the country and analyzed with nationwide and Massachusetts breakouts to illustrate how staff and leadership are faring in nonprofit careers.

The research, titled The Burden of Bias in the Bay State: The Nonprofit Racial Leadership Gap in Massachusetts, was funded by the Boston Foundation and the Barr Foundation and conducted by The Building Movement Project. Its finding? Massachusetts continues to follow national trends in its slowness to promote, retain and support nonprofit leaders of color. Researchers Frances Kunreuther and Sean Thomas-Breitfeld surveyed more than 400 nonprofit leaders and employees and held focus groups (conducted shortly before the COVID-19 pandemic) to gather perceptions and data on diversity, equity and inclusion efforts in the nonprofit sector in the Commonwealth and beyond. The research questions mirrored surveys done three years ago in order to monitor change.

Bottom line, says Kunreuther, “The number of leaders of color in Massachusetts nonprofit organizations is growing, but POC-led organizations are still undervalued and underfunded compared with white-led peers.” As in the previous Race to Lead Massachusetts report, released in 2018, the data show that people of color are more interested than their white peers in assuming leadership roles within the field—51 percent of people of color in the survey expressed leadership aspirations, versus just 38 percent of white respondents. However, nonprofit staff of color were more likely to express frustration with their limited opportunities for advancement, and fully half of staff of color in Massachusetts said they felt their race had a negative impact on their career advancement, versus just four percent of white staff.

And finding role models and mentors, while difficult nationally, seems to be even more challenging in Massachusetts. Respondents of color more often said that they needed to go outside their organizations to find mentors for advice and support from people who understood where they came from. In addition, respondents of color in Massachusetts were more than twice as likely as white respondents to say they often or always experienced a lack of role models than white respondents, and more than twice as likely to highlight a lack of social capital and influential networks that can be key to advancement.

A positive development is an overall improvement of white respondents’ ability to see the inequities in the system. Massachusetts nonprofits seem to lead their peers across the country in embracing the importance of diversity, equity and inclusion (DEI). Eighty-two percent of Massachusetts respondents indicated that their organization was engaged in DEI efforts, compared with 74 percent nationally—and this data was gathered before the current pandemic and social justice crisis put DEI issues even more front and center. Much of that work is focused inward such as in training for staff, leadership or board; addressing impacts on the organization’s area of work; or clarifying DEI’s centrality to the organization’s purpose and mission.

While awareness has risen—more than 9 in 10 of all survey respondents said a lack of diverse leadership is a “big problem” in the nonprofit sector—respondents see the path forward as problematic. Seventy-seven percent of POC respondents, and 62 percent of white respondents, said nonprofit leaders lack the will to make needed changes, around 60 percent overall said trying to address racism and race equity can create issues that nonprofits are not equipped to resolve. This may explain a level of skepticism about the potential for success the researchers heard expressed in the Massachusetts focus groups.

Following the data presentation Dr. Karilyn Crockett, Chief of Equity for the City of Boston, moderated a response from three nonprofit leaders immersed in the work. Crockett first invited panelists to describe their own experiences on their path to leadership, and whether and how the research findings played out in their own stories. She led by sharing how, as a 20-something Black woman leading a nonprofit, she would arrive at meetings with outside people, who would leave the conference room door open and sit smiling pleasantly at her, clearly awaiting the arrival of the “real” leader, presuming it could not be her! Panelists shared equally sharp details of their early realizations about the nature of race and racism within organizations, especially around leadership.

Both Elaine Ng, CEO of TSNE MissionWorks, and Abrigal Forrester, Executive Director of The Center for Teen Empowerment, remarked on the weight given to education credentials in predominantly white organizations, no matter how irrelevant to the work at hand, and on the assumptions made about them early in their leadership roles. David Shapiro, CEO of MENTOR: The National Mentoring Partnership, shared his journey from his first realization of privilege as a white man and the resulting charity-based impulse to work for change to his deeper understanding of the systems underlying that privilege, for which he credited the candor of his colleagues of color.

The trio discussed their own organizations’ efforts and general thinking about how to make progress on the equity front in nonprofits. Changing hearts and minds with DEI work is essential, but changing the structure and systems within the field is no less critical, they agreed. As Crockett said, “Race is not only a belief system, but an organizing logic.” Forrester put it perhaps more bluntly in saying, “It’s not just putting in a leader with the right complexion. If they keep doing things the same way, and can’t make it a place of advancement for all staff, then it’s just another plantation setup in a nonprofit.”