Report Identifies Barriers to Nonprofit Advancement for Women of Color 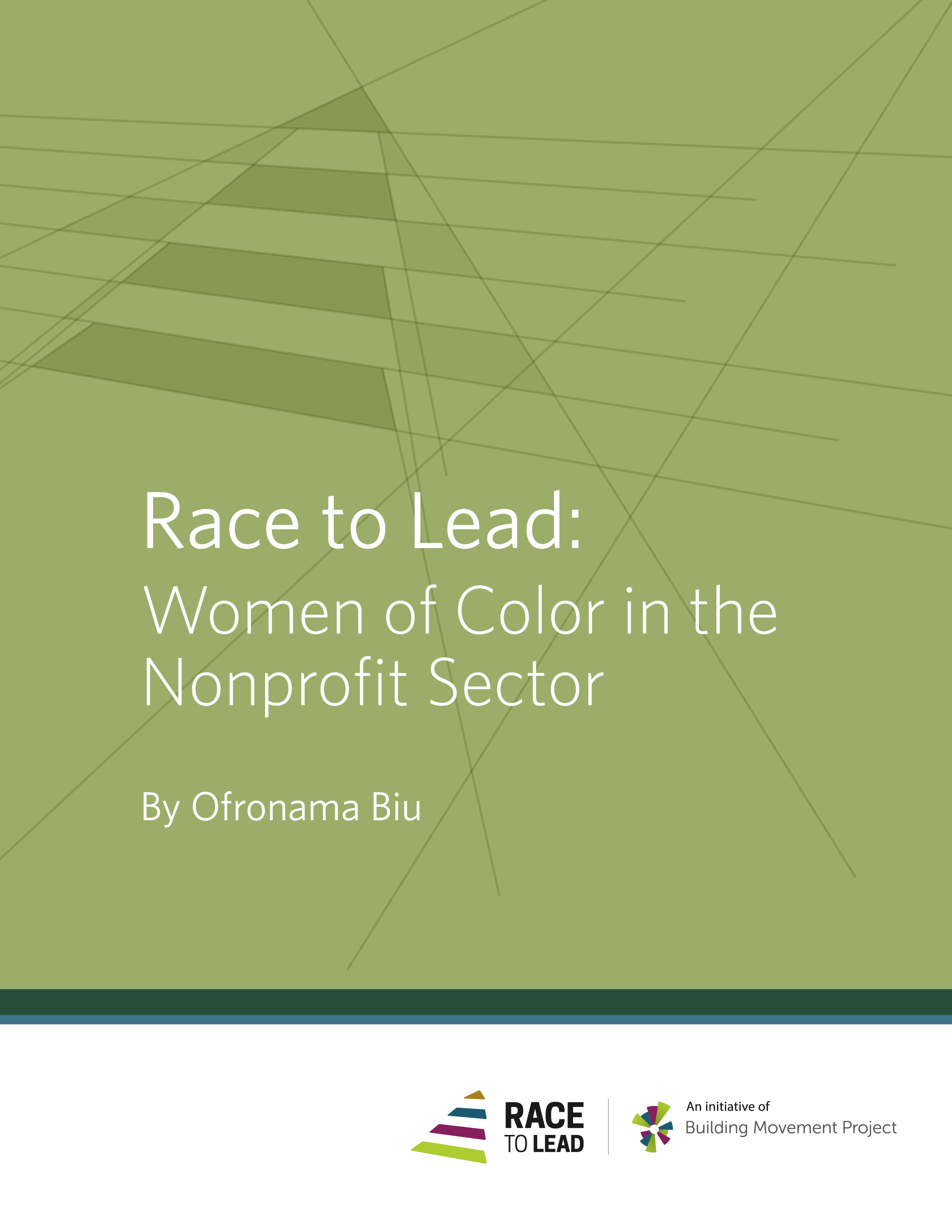 This article was originally published by Nonprofit Quarterly. To read the full article, please click the link below.

In a new report by the Building Movement Project, researchers uncovered something many women of color in the nonprofit sector intuitively know and find intimately familiar: Due to gender and race-based discrimination, women of color encounter significantly more barriers to advancement than white women and men of color.

The report, Race to Lead: Women of Color in the Nonprofit Sector, builds on the group’s 2016 research on the racial leadership gap in the nonprofit sector. The original research surveyed more than 4,000 nonprofit professionals and found that the dearth of people of color in leadership was not due to lack of ambition but to discriminatory policies and practices. By examining the impact of race and gender on career advancement, the latest report provides better understanding of the unique experiences of women of color.

The report documents three major findings, with the first being that overlapping gender- and race-based discrimination prevents women of color from advancing in their careers. Respondents frequently mentioned instances of being passed over for new positions or promotions in favor of white men, white women, and men of color. In some cases, the person held fewer credentials. One quoted participant said,

As an African American woman, there have been numerous experiences throughout my career…where I have been asked to train a junior white staff person because of their potential and the leaders’ desire to invest in them. In one instance, I was laid off from a project that I helped to create…at the time, I had a MA and five years of experience.

The organization decided that the 23-year-old white woman that had just graduated from college would be a better fit to lead the initiative and required me to train her before I left.

Researchers also found that, contrary to popular belief, education does not serve as a great equalizer and that often women of color are unable to advance. Analysis by race and gender revealed that despite high levels of education, women of color were more likely to be in administrative roles and earn less than white men or men of color.

Lastly, the report revealed that “the social landscape within nonprofit organizations can create conditions that undermine the leadership of women of color.” For participants that reported their race and/or gender negatively impacted their ability to advance, some reported feeling invisible, and they often were excluded or ignored. Others reported the opposite effect of being hyper-visible and under intense scrutiny. Both situations created additional stressors in the work environment.

While women of color are highly qualified and desire to lead, the survey and focus group interviews uncovered significant barriers and unaddressed discrimination in nonprofit workplaces. The report provides a series of recommendations intended to address these issues at the systems, organizational, and individual levels.

As one of the first reports of its kind, the Building Movement Project’s research on women of color provides a solid foundation for understanding their workplace experiences. However, the recommendations provided are rather general in scope. For example, the recommendation to “address internal biases” offers little more than to say that organizations should create inclusive policies. More specifics, such as what to include in such policies or examples of nonprofits or private-sector organizations leading the way, would have been helpful.

Additionally, there are some data concerns. The report asked separately about race and gender but did not specifically ask about intersectionality. While Kimberlé Crenshaw’s work on intersectionality has been known for some time, her insights were not fully reflected in the survey’s design. This omission may have forced respondents into making either/or choices rather than providing space for both/and responses. Unsurprisingly, women of color said that race was a bigger factor than gender by about 15 percent, whether positive or negative, except in organizations whose mission was related to immigrant or people-of-color identities. In those organizations, gender took over from race as the primary negative factor impacting advancement, though the negative impacts of both race and gender identity were smaller in identity-based organizations. According to the report, “Women of color expressed disappointment that these organizations were progressive on race and fell short regarding gender.”

Lastly, since the original research was conducted, national dialogue surrounding sexual harassment in the workplace has been reignited with the help of the #MeToo movement, a movement begun by Tarana Burke. While the researchers noted that a handful of women did provide write-in responses addressing sexual misconduct, intentional questioning may help uncover the full extent of the problem. With plans to resurvey in summer 2019, hopefully the organization will update its research design.—Chelsea Dennis